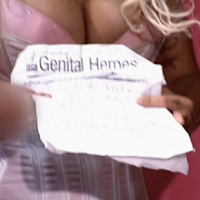 That's right, kids. Just in time for the third anniversary of Stupid & Contagious (yay!), my favorite reality train wreck Rock of Love is back for a third stab at making us think Bret Michaels really just wants a nice girl. The RockitKing has already given up on all of the Of Loves (thanks for nothing, Flav). But I, being mentally ill, am right here again, plopped in front of the TV and hating myself for the entire hour.

And what an hour it is. During the first ep of the last season of RoL, I mentioned my first impression was that I'd never seen so much bad hair in my life. Well, this time my first impression is that there are some plastic surgeons in this world that are on the run to South America as we speak, because what was done to some of these chicks can only be defined as criminally disfiguring. I mean, Michael Jackson's surgeon wouldn't say no and his nose fell off. At least half of these girls are struggling to stand upright. Bret seems to have gotten a little refresher, too. I'm guessing permanent cosmetics and a little chemical peel...

So once again, Bret kicks the show off by taking photos of the girls "for their backstage passes" and makes the same stupid joke for the third time about getting a look at their souls through the lens. The lineup of skanks this time around looks like a fucking sideshow. One girl, Gia, makes a big stink about how she loves being tied up. Another stunner named Brittanya has her dimples pierced and describes herself as "a little bit not too smart."

Then we have Constandina who hails from the "Appalachian mountains" and has a master's degree in storytelling. She references her "third eye" and I can already tell she's not going to win so let's not waste too much time on her. We also have Ashley, who Bret says looks like Juliette Lewis, but looks more like a Barbie doll, but when you squish its forehead into its chin, to me. Next in line is wild animal trainer Megan; brothel-madam-wannabe Natasha; Brazilian nut Marcia; a 40-year old with chicken cutlets for cheeks named Maria; Poison groupie Beverly; a Penthouse Pet named Taya who shows Bret her ass; and finally Mindy, who recently had her face sharpened.

And then there's Nikki, or as she calls herself, DJ Lady Tribe, or as I like to call "her," The Thing. The Thing makes Daisy and Frenchie from last season look like pillars of class and sophistication. I mean, she is seriously the most disgusting hot mess of melted plastic, synthetic hair and goofballs I've ever seen in my life. To tantalize Bret, she sings him a rap that she wrote herself...on two pieces of paper with the headings GENITAL HERPES and GONHORREA. I wish I was making this up. Then she appears on camera slurring that everything she's on "is legal" before belching into the camera. And it only gets worse from here, if you can believe it. Just you wait.

So this season, Bret decides that he can't keep a girl because he can't find someone who can hang on the road. So he's loading all the hobags on tour busses and dragging them around the country with him on his solo tour. Of course, he makes the same wisecrack about rock n' roll being the cause of and the solution to all his relationships. Thank god he doesn't reference rock as his "bitch goddess" again, though. The bitches load up on blue and pink tour busses, with help from our old friend Security Goon Big John, who is shown emptying a trash can that seems to be filled to the brim with tampons. Oh god, please bleach your hands after that, Security Goon Big John.

As soon as the busses hit the highway, the drama begins. Squishy Barbie Doll Head and Brazil Nut start fighting right off the bat all the way to the first stop in Louisville. There, they meet Bret at his concert and are immediately brought out on stage to skank it up for the crowd. All manner of drunken antics take place including make outs, boob reveals and ass lickings. About three-quarters of the girls act like mega-sluts in front of the audience while the rest interview their disgust. Then if that wasn't bad enough, the real action starts in at the after-party.

OK, when I say real action, what I really mean is likely the skankiest thing to ever happen in the history of reality TV. I mean, it's so skanky that even the skanks were grossed out. Want me to tell you what it was? OK, brace yourself. Gia the Masochist announces that she's not wearing underwear and hops up on the bar to prove it. The Thing announces that she's horny and proceeds to...how shall I say this? OK, she has a test tube shot, and she puts it in the test tube rack, and then she drinks from the test tube...oh hell, we don't get to see it, and thank god, because even Bret looks disgusted.

Ick, yuck, blech, gahhhhhh...anyone know how to do an at-home lobotomy?

Anyway, moving on from that unpleasantness...

The next day (?), the miscreants are allowed to leave the cramped shittiness of the tour bus and move into cushy hotel rooms, stocked full with all the booze one could ever hope for. Brazil Nut is in heaven with her bottle of tequila. She's like a chain smoker, except with shots. She's dancing around, whistling, doing cartwheels and you know what's coming next. That's right: vomit on the first episode!! A RoL first! And to make it even better, she staggers out of the bathroom, lurches up to Bret and Frenches him. Toilet seat to Bret's lips—this may be the best RoL episode ever!

After that traumatic experience, Bret pulls tomboy Beverly aside for some alone time and instantly takes to her when she says he's the only one on her free pass list, not including Edward Norton in American History X. Is that before or after the curb stomp scene, Bev? Of course, Bret doesn't ask that or any other important questions. He just immediately starts giving Bev a tongue bath.

After a couple more fights, it's elimination time, and The Thing is wearing a red bathing suit and can barely stand up. Bret says there's urgency in the elimination ceremony this year because "I have to be in Indianapolis by morning." Better get moving, Bret! It's a long haul from Louisville! To make it snappy, Bret calls the names of the girls on the chopping block and it's all the ladies that caused the most drama on this ep. Of the group, Bret decides to keep Brazil Nut and Porny around for another week, which means Gia's out and, goddammit, The Thing is gone! The Thing is splayed out on the floor of the studio while the PAs are tearing down the set around her. Two hapless assistants have to drag her off the set. Oh, Thing, no one will ever forget you. You and your test tube shots...

How do you sharpen a face? That RockitKing sure sounds like one Hell of an amazing man!!

You're description of Nikki makes her sound perfect for the clown prince of rap, MR. FLAVOR FLAV. Do I hear "Flavor of Tribe" is in the works for a Spring release? It's where each personality from only Flav and Tribe are pitted against each other in a caged drinking match in Baja California...


"And then there's Nikki, or as she calls herself, DJ Lady Tribe, or as I like to call "her," The Thing. The Thing makes Daisy and Frenchie from last season look like pillars of class and sophistication. I mean, she is seriously the most disgusting hot mess of melted plastic, synthetic hair and goofballs I've ever seen in my life. To tantalize Bret, she sings him a rap that she wrote herself...on two pieces of paper with the headings GENITAL HERPES and GONHORREA. I wish I was making this up. Then she appears on camera slurring that everything she's on "is legal" before belching into the camera. And it only gets worse from here, if you can believe it. Just you wait."