Another reason to not fuck with Norway

They'll put on skin diving suits and chase you down the street with tridents. I don't blame them. Google Street View is creepy. 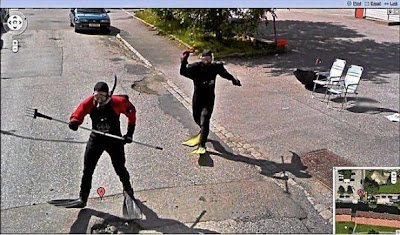 Norwegian men in scuba gear give chase to Google Street View Car
Sorry to bust your bubble you Berlin Google pranksters, but a couple of guys from Norway just pulled off the best Google “Street View” prank yet. Seems two unidentified gentleman had heard a Google camera car was in the neighborhood, so they decided to dress as scuba divers and laid (or rather sat) in wait for the unsuspecting car.

As soon as the Google vehicle passed by, the two men sprang into action. They both leapt from their respective lawn chairs and gave chase as best they could behind the “Street View” car as it traveled down the road with one of the men brandishing a fishing fork. Fortunately for Google, since both the men were wearing diving flippers at the time, the pursuit did not last very long. All the while, however, the Google cameras snapped away at the bizarre chase taking place.

Now it seems no one is exactly sure how these Norwegian men caught wind that there was a Google “Street View” car in their town. What is known, though, is that Google apparently did not mind the funny scene as they posted the photos on Google Maps. Just go to “Street View” level to see the pair on the side of the road and then continue down the street to see them give chase.

So you mean to tell me they weren't scooped up by an air tanker and dumped on a forest (or in this case, stave church) fire? Ha ha, just kidding—you can actually see the lawn chairs on the right side of the picture. It looks like they also have an umbrella and a newspaper, so they must have been there for a while. How long did they wait? What ran through the minds of passersby? And who are these masked and flippered men? I'm going to pretend that it's Abbath and Horgh from Immortal. Bergen, Norway, could use a little injection of humor now that the Count is walking among them once again.

On a side note, I'm disturbed that it appears to be SUNNY in this picture. So that means The Grim and Frostbitten Kingdom has sunshine and no snow, while Cowtown marinates in a vomitous muck of icy sludge.
Posted by RockitQueen at 7:49 AM No comments: 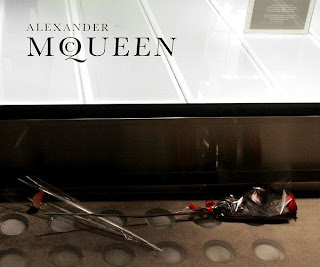 Posted by RockitQueen at 8:51 PM No comments:

Isabella and the Squid

Ever wonder about the sex life of a bee, an anchovy or a barnacle? Love Isabella Rossellini? Well, I'm about to make your day.

Remember the old "We Are The World" video? And how the camera panned over the stars as they sang and all of a sudden you saw Dan Aykroyd with headphones on singing, too? And you thought, "What the F is Dan Aykroyd doing there?" 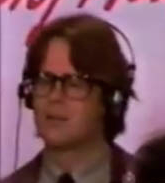 Did you see the photos from the recording session of the new version of "We Are the World?"

Vaughn: The New Aykroyd.
Posted by RockitQueen at 8:51 PM No comments: