I'm only posting because I want to see if the blog will let me post on 2/29.
Posted by RockitQueen at 9:35 PM No comments: 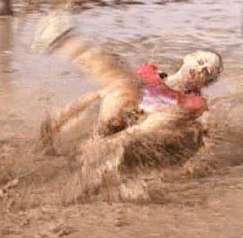 It completely sucks to be without a computer. Not only that, but I'm two eps behind on RoL recaps, I missed Norwegian Black Metal Day (but hopefully you celebrated anyway), and I am marinating in a cesspool of food wrappers and cat puke. What can I say? I'm lazy.

But now my 'puter is back in my arms and good as new! So there's one thing fixed, I guess.

Anyhoo, here's my synopsis of the latest RoL, but don't think I'm going to forget about the other two eps I missed. One of these days there will be a marathon and I'll be caught up at last. It's a challenge to myself...I have goals and dreams, you see.

So the show starts off with a huge shock...Security Goon Big John is hatless! And he has hair! I was convinced he was balder than Bret under that filthy baseball cap/bandanna combo he always wears. Not so—he's got quite the mop going. The next test is to see if he ever goes hatless around Bret. Sort of like how Nicole Kidman was never allowed to wear heels when she was married to Tom Cruise.

Anyway, since we're down to the Fine Nine, it's Mud Bowl time! Remember last season's Mud Bowl? I don't really either. But I do remember that the skanks were divided onto teams based on if they were good or bad. This year, the Sweethearts team consists of Catherine, Ambre, Jessica (who's that?) and Peyton and the Fallen Angels bad girls are Alexis Arquette, Kristy Joe, Destiney and Fatass Inna. Megan sits out and therefore forfeits her chance for a super-sexxxy Bret Date.

The twist to this Mud Bowl is that Bret is in control of some kind of weather machine that spits out rain, wind and snow at his command. Because of this, he announces that he is "a god" today and who does he think he is paraphrasing the great and mighty Plant?

Anyway, the game begins and Ambre immediately scores two touchdowns. It's torturous to watch the hoes trying to be sexy while they are getting body slammed into a cesspool of mud and (hopefully) shit. They may be playing slip n' slide in the dirt, but god forbid if their bellies aren't bared appropriately. Alexis Arquette is the go-to gal for the Fallen Angels team and she keeps trying to shout orders through her mouthguard. Wow, even with something shoved in her maw, she keeps on talking. Maybe she IS the right girl for Bret!

Kristy Joe puts the Fallen Angels on the board and the game goes into sudden death. Ambre fumbles and the Fallen Angels win when Refrigerator Perry shows up, picks up the fumble and scores a touchdown! Hey, when did he get in the game? Oh wait, that's just Inna. Sorry. The champion team moons the losers and Alexis Arquette is named MVP because it takes some true skill to play a rough game of padless, tackle football with a tuck.

Back at Maison de Putain Peyton and Catherine are lamenting the fact that they haven't had solo dates with Bret. Peyton, who I just realized reminds me of Amy Madigan in Uncle Buck, decides to be proactive and tape a note to Bret's door that says she urgently needs to talk to him. It just so happens that at exactly the same time in a totally not-at-all contrived scene, Megan is also writing Bret a note on a little piece of heart-shaped construction paper, which she wants to leave on his door. Megan interviews that she goes to put her "very cute nice note on my boyfriend's door and then I see a gross note," which she immediately removes from the door and replaces with her own.

Then, in another completely random moment Peyton decides to make sure her note doesn't sound crazy and returns to Bret's door to find it gone. So she writes another one and this time slides it under the door. But then Megan returns and fishes around in the door crack and manages to retrieve Peyton's note. OK, Megan is creepy. She talks really slowly and has the sociopathic "who, little ol' me?" presentation of Norman Bates. Also, she's really, really stupid. Unfortunately, this completely unplanned incident comes back at elimination.

At this point, Bret and Alexis Arquette return from their hot lingerie store date and Catherine makes her move to spend some alone time with Bret. Instead of talking, they just French for about an hour. Alexis Arquette interviews that Catherine reminds her of Peggy Bundy and then tries to butt in on their makeout session. Catherine calls her a bitch and then Bret goes to bed.

The next day, Bret takes the other girls from the winning team to a racetrack to speed around in a yellow Penis Compensation Vehicle. The actual driving is really boring, except when the mom from What's Eating Gilbert Grape? shows up wearing a skin-tight racing jumpsuit and announces she can't drive stick. Oh, wait, that's Inna. Sorry.

Bret sits down with the three gals for lunch and once again starts gossiping like a woman about the other girls, and Kristy Joe drops the bomb that she has not one, but TWO restraining orders on not one, but TWO ex-husbands. Bret looks horrified and I'm wondering if she has terrible taste in guys or if she's just really, really dramatic. And I'm also wondering what happened to her crippling germ phobia from episode one. Maybe she issues restraining orders against people who don't take three showers a day.

Back at the house, Bret meets privately with Peyton and she immediately starts sobbing. Here's a little secret that PeyPey doesn't know yet—Bret didn't see her note because Megan stole it! How embarrassing! But not as embarrassing as when Bret responds to her question of "Are you attracted to me?" with "Don't take this the wrong way..." and then proceeds to tell her that he doesn't want to play the "friendship rock-out buddy card where we become friends who occasionally fuck." Ouch. Who needs dignity when we could be vying to be more than a fuck buddy to Bret Michaels?

Mercifully, it's elimination time and Megan says, "Me and Bret have a mental, like, Superman...like, psychological connection." It should be noted that Megan says this while wearing a silk lingerie bra top and Daisy Dukes. So I'm sure that's exactly what the big connection is, Lois Lane.

Bret shows up at the ceremony wearing more eyeliner than any of the girls and starts handing out passes. When he gets to Megan, he says in a free-flowing, not-at-all cut-and-pasted sentence, "She was the [cut] only girl [cut] to [cut] put a letter [cut] on [cut] my door." Peyton looks pissed and mentions ripping someone a new asshole and Megan voiceovers that Bret "wants to date [her], not my grandma" and Megan, I knew Hatchet Face and you, madam, are no Hatchet Face.

So it comes down to Peyton and—surprise!—Alexis Arquette! After Bret slutted her up and pretended to be interested in her baby babble she ends up in the bottom two! Bret is a total dick! Alexis makes a sad face that makes her look like her face is melting off and Bret calls her to come over to him. In a totally unexpected surprise twist, Bret announces he's saved the best for last and that he wants to keep ALL the girls around this week! Oh, noble god Bret! Maybe you really DO care about their hearts and minds and not just their boobs and deep throating abilities!

As the episode fades out, the gang cracks open beers and we hear Bret say, "Oops, did you get it in the face?" Ah, that's more like it. Bret stays just as we like him: crude, rude and in the mood!

Next week: since Bret was being nice this week, TWO bitches are being sent home! Step it up, skanks.
Posted by RockitQueen at 9:12 PM No comments:

So I've been sans computer for a week-ish and am finally back in the game. And thank god...I've been positively dying to comment on Rock of Love, Celebrity Rehab and sundry other important topics.

Stay tuned...I have a three-day weekend ahead of me and I'm going gangbusters on posts!
Posted by RockitQueen at 9:39 AM No comments: 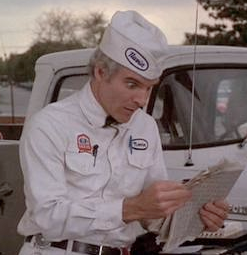 It's official: this blog is going places. Don't worry, I'll remember all of you when I get super-famous—I promise.

What am I getting all bent out of shape over?

Well, folks, it's because probably the LAST person I ever would have imagined not only read my blog but left me a message!

Who would that be, you ask?

Why none other than DEREK FUCKING GILBERT OF P.I.D. RADIO!!!!

Not only that, but the note was good-natured about what was essentially a really mean post, which is quite cool. Anyway, check out Derek's comment for yourself. He's an impeccable speller.

(And speaking of The Jerk, now I kind of feel like one.)
Posted by RockitQueen at 8:20 PM 4 comments: