The best sexy Halloween costumes for the day after

Two years ago, I saw a girl at about 8 in the morning the day after Halloween wearing a Sexy Alice in Wonderland costume. She was bending over into some bushes, her bloomered ass exposed to god, retching like no one's business. I mean, the sound of her voms could be heard echoing down the street. I've never seen anything like it, nor will I ever forget it.

I like to think she was doing the walk of shame after hooking up with some frat dink dressed as a pimp. It was the perfect kick-off to All Saints' Day.

The point is, sexy costumes aren't always stupid, but think about where you may end up later in the night and if there's potential to become fodder for an embarrassing story on a blog no one reads. It's an online world, you know.

Sexy Alice in Wonderland is an example of the sexified children's character. Not only are these costumes creepy, you can never hope to look composed on the day after in one of these. Watching someone puke in the bushes wearing a Sexy Elmo outfit is likely to change your life forever. And not in a good way. Other ridiculous examples include Sexy Teenage Mutant Ninja Turtles (hottie in a half shell!), Sexy Rainbow Brite and the just plain fucking stupid Sexy Spongebob.

Only slightly less embarrassing would be for you to be caught passed out in front of a Taco Bell with a "sexy item" costume up around your waist. Imagine waking up at noon on November 1, in a strange yard decorated to look like a slaughterhouse dressed as a Sexy Beer Pong Game or a Sexy Hunter's Trophy Rack. Guaranteed this would be one of the lowest points of your life. It would be better to be in the nude.

You need to plan ahead to do one of three things: scare, confuse or blend in. Try dressing as a slutted-up version of a movie serial killer, like Sexy Freddie Krueger, Sexy Jason and my personal fave, Sexy Leatherface. At least no one will fuck with you.

Another good bet is to confuse people with sexy costumes that don't make sense (like any of these do, but you know what I mean). Try going as aSexy Transformer, preferably Bumblebee, which is the lamest of all the Transformers. And even more inexplicable, Sexy Brian from Family Guy. People's minds will be too busy trying to wrap around your bizarre outfit to notice you look like shit. And that you're face down in your own sick.

The best of all options is to go as someone who is already known for being constantly wrecked. Try Sexy "The Situation" (complete with fake abs) or Sexy Duffman. You'll blend right in with all the empties on the porch in these and your friends, neighbors and anonymous passers-by will be none the wiser to your fuckery.

Have a good one, bitches! You'll find me in the most sincerest of pumpkin patches, waiting patiently for the Great.
Posted by RockitQueen at 8:40 PM No comments: 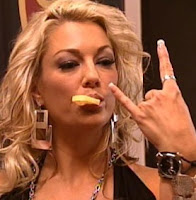 Great minds think alike. And if you believe that, then I should be the head of creative at VH1.

The greatest reality show producers on the planet and I both have inflicted Rock of Love girls where are they now recaps on an unsuspecting and uncaring world.

If you're so inclined, you can watch the whole damn VH1 special online. Warning: it contains copious amounts of Rikki Rachtman.

The rundown is pretty close to mine: drunk, stripping, babies, stripping, drunk, stripping, finding the inner self, stripping, Hustler, stripping blah blah. Lacey's singing is fucking horrible (although I totally commend her dog rescue endeavors), Mindy's living in Cinci and working on some kind of food fetish calendar, Rodeo is a darn sweetheart and Brandi C. is engaged to a Billie Joe Armstrong lookalike. As an added bonus, some of the bitches bash on Bret and trash him for being a big, fake ho. The saddest (and awesomest) quote comes from Squishy Barbie Doll Head: "He's a skank just like me."

Embarrassing confession: I totes want to hang out with ASHeather.
Posted by RockitQueen at 6:31 PM No comments:

What the world needs now is Gunn, Tim Gunn

Tim Gunn recorded a video message for The Trevor Project, a nonprofit suicide prevention organization for LGBTQ youth, in which he tells bullied and lonely teens life will get better. He also drops the bombshell that he, at 17 and feeling desperate, tried to take his own life! Take a look:

Could this man be more awesome? I'm so glad he's become such a surprise breakout star. He embodies class, compassion and dignity. If the world was made up of Tim Gunns, there would be no such thing as terrorism alerts and Rock of Love.

Plus, Tim had the balls to call out Anna Wintor for acting like a psycho diva at a fashion show and refused to retract his statement when she lost her shit and demanded an apology. Love! I so wanna be Tim Gunn's fruit fly.

Holla atcha boy!
Posted by RockitQueen at 7:03 PM No comments:

Where are the Rock of Love hobags now? 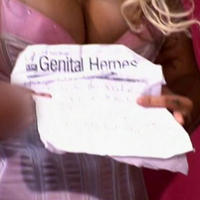 What are those scary things, you ask? I know you're afraid, but you must know the truth:

I've been wondering what the Rock of Love girls have been up to lately.

Season 1
• Well, here's a doozy. Everyone's least favorite reality villian Lacey "Hatchet Face" Connor is the new singer for Lords of Acid. HUH?? They're currently on tour with Praga Kahn and My Life with the Kill Thrill Kult. Jesus H. Christ. It's like my senior year of high school, complete with the creepy bully and the Rave New World soundtrack.

• Hatchet's nemesis, Heather "Aging Strident Stripper" Chadwell, is still darkening our doorsteps via the television. She's skanked it up in cameo appearances on Californication and It's Always Sunny in Philadelphia. She's also involved in the dubious "hosting" that so many of our little reality friends do to make a living. ASHeather's appeared at such red-carpet events as the Zodiac Winter Wonderland Party, Yeeha's Rockin' Bar & Grill's St. Patty's Day Bash and Hula Hank's Naughty Schoolgirl Night.

• We all remember Cindy "Rodeo" Steedle as the Hulk-like cowgirl with the heart of gold who was too close to Bret's age to ever have a chance at being his rock of love. She's now the host of some kind of exotic funny car show called Sick Speed TV (it's unclear where exactly this show is going to air and even if it's going to air on actual TV). And hold on to your hat: she's also getting ready to film Rodeo's Legs of Steel! Ah, the Of Steel video series. Everyone bought that in college, did it once and then tossed it in the back of the closet next to the hot plate.

Season 2
• Poor little Daisy de la Hoya. First she was rejected by Bret in the season finale, then she tried to find a man on her own show Daisy of Love, but that didn't work out either. Then, she had supposedly found love with the one and only Corey Haim...and then he died. Despite that (and despite looking like Janice the Muppet), Daisy soldiers on. She recently released an album with her unfortunately named band Seraphim Shock and has released her own song "Suck It" on iTunes (clean version also available).

• As for Megan Hauserman, after the unfortunate abomination Megan Wants a Millionaire dating show was cancelled due to, well, homicide, our favorite scheming dum-dum hasn't had enough of TV yet. She's currently filming a series for Showtime called Ocean Heat Miami, which I expect is going to be one of those classics that only airs after midnight. Gross. Also, Megan recently did a super-sexxy photo shoot with the Miami PD.

• Ambre Lake "won" Bret in the end after nearly getting kicked off in the first episode. Amazingly, Ambre and Bret actually did date for almost a year. Now, she's co-hosting a weekly music show in SoCal called Focus in the Mix with Denise Ames on which she's interviewed such rock luminaries as Frank Stallone and Quiet Riot's Carlos Cavazo (while Denise Ames got to interview Lemmy).

• Destiney Sue Moore was a super-wild bisexual freakshow when the show aired. Then, after appearing on Charm School, she appears to have turned into a completely different person. She started her own Ed Hardy-like clothing line called Divination and appears to have gotten married and popped out a kid. So, you know...yay?

Season 3
• Gia Lynn was eliminated on the first episode, but was one half of the duo that performed a drunken act so grotesque, so sordid and so unsanitary that even Bret looked disgusted. Gia is now an "Adrenaline Crew 4 Girl." This seems to consist of posing skankily in photos associated with one of those motorcycle daredevil groups that performs idiotic stunts on public highways and tapes them for a series of badly-produced YouTube clips and DVDs.

• Mindy Hall, dissed by Bret in the final two, is currently "starring" on VH1's stupid gameshow I Love Money 4. You may be saying, "But Rockit, I don't remember there being an I Love Money 3." That's because it was trashed when one of the contestants killed his wife, pulled her teeth out and threw her in a dumpster, then drove to Canada and killed himself [see Hauserman, Megan].

• Ashley "Squishy Barbie doll head" Klarich describes herself on her Twitter account as [sic] "just your average tattooed,whitetrash,jager drinking,Vegas stripper who turns obstacles into popsicles and then I suck the shit out of em!" Good news, everyone—Squishy's still stripping! And sucking!

• You may remember Beverly Palmer as Season 3's tomboy who told Brett that when she was married, he and Edward Norton in American History X were on her free pass list. This year, she's done RoL proud by receiving two DUIs.

• Brittanya O'Campo, she of the pierced dimples, Sharpie eyebrows, pseudo-gangsta posturing and helium-filled skull, was arrested and charged with assault with a deadly weapon causing bodily harm and assault and battery. It's unclear what the outcome of those charges has been. In the meantime, she's now modeling for a clothing company called 187 Avenue, which I'm sure is greatly helping her case.

• Cowtown native/Penthouse Pet Taya Parker was pretty much hated by everyone on the show, but she took home the prize (Bret's peepee) in the end. You may remember (or, if you have a life, you won't) Taya continually squawked that she wasn't a stripper, she was a burlesque dancer, even though she worked the pole like it was the first of the month. Well, low and behold she's currently performing in Striptease: The Show, a topless burlesque extravaganza with "hilarious audience interaction", held nightly at The Sahara in beautiful Las Vegas, Nevada. Tickets on sale now!

• On the show, Nikki "The Thing" Shamdasani was the other half involved in that monstrous display of sluttery that astonished even Bret. She also barely slurred and staggered her way through one episode before getting the boot. The Thing continues to travel to motosports events around the country to spin records under the name DJ Lady Tribe. She also continues to serve as a living cautionary tale on what happens when you get an ungodly amount of disfiguring plastic surgery.