I don't think you can handle this!

So Beyonce has apparently changed her name to Sasha Fierce. Is this real? God, I hope so.

She explains, "I have someone else that takes over when it's time for me to work and when I'm on stage, this alter ego that I've created that kind of protects me and who I really am. Sasha Fierce is the fun, more sensual, more aggressive, more outspoken side and more glamorous side that comes out when I'm working and when I'm on the stage."

She's even started a Myspace for Sasha Fierce...her top friend is Tom! She's holding a Sasha Fierce contest where one lucky winner gets a personal message from Sasha Fierce "when she is ready to reveal her identity" and a $500 gift bag. She has a French phrase on her page that translates to "I walk among holds the first role," according to Babelfish. She's uploaded pictures of cosmos, palm trees and a robot hand.

So is she now going to take on a whole new persona, a la Garth Brooks and the whole Chris Gaines debacle? Is she going to release albums under both names? What does this mean for her sister Solange? Is she now going to change her name to Shasta Intense to compete? And does Jay-Z call her Sasha Fierce? I would think that he would frown on such stupidity, but it's adding some spice to their sex life so he just quietly tolerates it.

Labels: douchebags, news of the weird 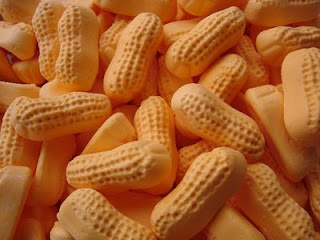 Halloween is the greatest, most bestest time of year! I've been formulating a gazillion Halloween-themed post ideas and wasn't sure where to start. Then I read this bullshit from Yahoo and had to comment.

This is a "witty" eats column on the worst Halloween treats. I don't know who this "Erin Zimmer" food snob is, but it seems she hates everything that as long as it's delicious. I hate lots of things, too, but if they are delicious, they get a pass. This is one batch of choices that makes no sense whatsoever. And it's not at all funny, to boot.

Among Erin Zimmer's picks:
• Candy Corn. Zimmer calls them "the fruitcake of Halloween." What?? Candy Corn is fucking delicious! Of course, if you're rolling around nude in a pile of Snickers bars and Reese's Cups (see below), I guess Candy Corn might seem inferior to your tony trick-or-treat tastes.

• Dum-Dum Pops. Zimmer quips that these wouldn't even be good if they were "deep-fried and served at a fair." Once again, candy snobbery. They may be small and cheap, but Dum-Dums pack a bold punch. Name me another lolly brand that offers such awesome flavors as root beer, cream soda, orangecicle, buttered popcorn (which is really, really tasty, by the way!) and the elusive Mystery Flavor.

• Necco Wafers and Smarties. Zimmer derides both as being "too chalky." Clearly, she has never smashed them into powder and snorted them like any self-respecting child of the '80s does.

• Fun size candy bars. I find this to be the most shocking of all, because her reasoning is that the folks that hand out "fun size" items don't know the meaning of fun. Ms. Gourmet would rather trick or treat in the rich neighborhood to get a bag full of FULL-SIZE candy bars. What a greedy pig! How many goddamn candy bars does this hog need?

• Tootsie Rolls. Proof positive that this bitch is crazy. She whines that Tootsies will strip the fillings right off your molars. Hm, weird...I love Tootsie Rolls and I have never had a cavity, Zimmer! Coincidence? You decide.

Certainly this was all done to get some yuks from the lowest common denominator, but I take this shit seriously. I am a firm, steadfast supporter of all the treats listed above. What I find far more disturbing than Zimmer's distaste for the sublime, are all the other, far nastier, items that are absent from the list. But then again, Zimmer probably thinks these are all awesome:

• Circus Peanuts. Down with Circus Peanuts! I'd rather eat circus barf than this orange fluff that was probably emitted straight from Beelzebub's ass. Have you ever met anyone that actually likes these things? If so, let me know and please specify if they are able to feed themselves.

• Pal Gum. With Bazooka, at least you get the stupid comic. With this piss, you get a mouthful of pink sugary slime that disintegrates in seconds. Pal Gum is most definitely NOT your pal.

• Bean Boozled jelly beans. These have since been rebranded as Harry Potter jelly beans, probably as a way to get rid of leftover stock. With flavors like booger, earwax, rotten egg, vomit and soap, you'd be hard pressed to get even Gene Simmons to endorse these.

• Saltwater taffy. Every year, you'd find a handful of loose taffys rolling around in the bottom of your treat bag. They lure you in with their pretty colors and traditional candy wrapping. But then you eat one. And it's like that time you tasted Silly Putty (you know you did!).

• Brach's Jube Jels. This is what you get when you leave Jell-o squares out for too long.

Where do you even go to get a full-size candy bar on trick or treat night? Have you ever even heard of such luxury? What's next? Louis Vuitton treat bags? Vera Wang-designed princess costumes for 5-year-olds? Our country is on the brink of collapse and this is how people choose to spend their money. GAH! I refuse to let this ruin my Halloween!

On a side note, do parents still check their kids' candy for razor blades? That was a big thing when I was a kid. Allegedly, some kid in my hometown got an apple with blades shoved in it. One question always remained unanswered: why? Like some nefarious group of toughs was out putting bear traps in treat bags and handing out cyanide-laced Good n' Plentys for the sole purpose of ruining Halloween for youngsters. If only I knew then...
Posted by RockitQueen at 6:31 PM No comments:

Labels: news of the weird, online

Pride: the sin we all let slide

How do you like my cool new header? Pretty sweet, isn't it? I did it all by myself! Just preparing the blog for impending fame. Anyone who would like to advertise on S&C can just leave me a comment or something and I'll get back to ya.

The financial crisis has me in a major twist lately, as it has many people. Thus, I urge you to support the Financial Crisis Half Marathon, which will be held in Cowtown on October 20. Support for this race means you are a true American and a professional thwarter. I'll be there, with my AK-47 in tow, wearing an American flag bikini. Made out of a real American flag! Take THAT, bureacracy! Pew, pew!
Posted by RockitQueen at 10:30 AM 1 comment: