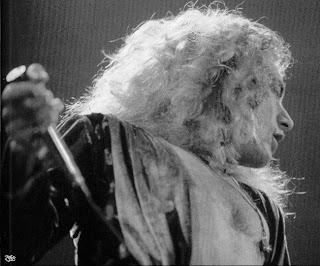 Happy 61st!
Posted by RockitQueen at 7:32 PM No comments:

The grand wizards of shitty folk

Longtime readers of this very blog may remember my write-up on Lynx and Lamb Gaede. They're the adorable little Olsen twin look-a-likes that make up the folk music duo Prussian Blue. Oh, and they're also white supremacists who like to build Hitler snowmen and brand their cattle with swastikas.

No word on what these two are up to. I couldn't find any information on them past January 2008. The twins are 17 now, so maybe they're off to college or married the Unabomber or something. No matter—whatever they're doing now, Prussian Blue better set up plans to record in the Mariana trench or something because they've got some competition!

The band consists of sisters Shelby and Charity Pendergraft, the granddaughters of Thom Robb, the national director for the Knights of the Ku Klux Klan. In the excellent book Them: Adventures With Extremists, author Jon Ronson describes Robb as the KKK leader who doesn't use the n-word. Robb is attempting to remake the Klan as a kinder, gentler kind of hate group and has compared the organization's infamous white hoods to ties that businessmen wear to work—it's just a tradition, dontcha know? He's protested against the Martin Luther King, Jr., holiday, but says his approach is "gentle, upbeat and friendly."

Anyway, Robb's granddaughters have recently sieg-heiled their way into the limelight with two recently released CDs, Aryan Awakening and Standing Our Ground. The latter's cover features the girls standing on a mountaintop in modelish outfits and poses and waving a flag that bears the legend "White Pride Worldwide." Like, cute!

The songs cover the old predictable vanguard faves—immigration, interracial relationships, apocalyptic race wars, yadda yadda. But that's not why they blow. Shelby and Charity are horrible singers. Horrible. If you didn't think it was possible to sound whiny and monotone at the same time, check out Heritage Connection. Dogs all over rural Arkansas are clapping their paws over their ears as we speak.

Far more interesting than the girls' music is their blog, which in a rare showing of integrity, I'm not going to link to. If you're really interested, look it up. I found it occasionally eye-opening and informative. For example, did you know that Eureka Springs, Arkansas, has been "overrun by queers"? Playing there was "an interesting experience", but left the girls feeling "sick to our stomachs." Now I want to go to Eureka Springs immediately. What kind of delicious, stomach-churning faggotry is going on in this city? It sounds like fun!

The girls complain that the JCPenney in their town "is starting to look like a Mexican recruiting station." What is that, exactly? And why won't the Mexicans recruit me? I love chimichangas! Ironically, the girls later talk about how they had delicious enchiladas for dinner and how their family "loves Spanish food." Isn't a love of food that ends in vowels grounds for recruitment? If not, what is??

Overall, the blog is devoted to describing in excruciating detail everything the girls and their family consumed at various gatherings and holidays. There are a couple of declarations of undying devotion to Ron Paul. And there is talk of a Spongebob Squarepants birthday cake. Hypocrites! Spongebob is a Communist!

Of interesting note: an article on Heritage Connection on the Southern Poverty Law Center's website points out that the girls' site is decorated with various European flags, including one from Ireland. Don't the white power-ists hate Catholics? Newsflash, homeschool idiots: Ireland is predominately Catholic.

What's the point of this post? To make fun, of course. This is the best music they can come up with to represent their cause? They'll never take off because they're lulling their followers to sleep! And Allah help us if they team up with Prussian Blue and do a tour of bunkers and windowless cinderblock buildings. Girls, when you make up your rider, don't forget to request those yummy tacos!

On a side note, did you know the KKK's finance guy is known as the Grand Goblin? I smell a band name!
Posted by RockitQueen at 6:13 PM No comments: