I'm peeing my pants right at this very moment because I got my tickets to the concert of the millennium: NINE INCH NAILS AND ORIGINAL JANE'S ADDICTION!!!!! I promise a full report with all the fabulous details and plenty of braggadocio. Be prepared, bitches!!
Posted by RockitQueen at 8:18 PM 1 comment: 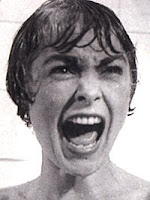 I feel it's my duty to notify readers that Trip Advisor's 2009 Dirtiest Hotels list has come out. Last year, I relayed some choice comments from the 2008 list, so I think I'm going to make this an annual thing. Because after driving for 16 straight hours and finally laying down for a good night's rest in a Comfort Inn, only to stick your hand in a load of dried spooge that had been smeared on the comforter for god knows how long...well, I just don't want that to have to happen to anyone else. That's enough to turn anyone into a hotel snob.

Now I'm not being Gwyneth and saying you have to stay at the exclusive Chateau Prétentieux if you don't want to sleep on a bed of assorted pubes. Just do a little research, bring your own pillow and if you see jumping bugs, check out immediately.

Anyhoo, like last year, I'd like to highlight some of the more hilariously disgusting stories of filth submitted by those who lived it. Prepare to puke. Of note: there are three Days Inns on the list this year. Coincidence?

One was able to see through the glass just enough to observe a band of errant prostitutes, soliciting buisness on the front steps of the hotel from a group of equally degenerate drunkards.

This is the kind of place where at any time a pancake makeup-encrusted octogenerian with yellowed teeth, clad in a shabby silk bedcoat and moth-eaten feather boa can be expected to be seen wandering the halls muttering, "Mr. Demille, I'm ready for my close-up."

The front door had a paper sign for a party group meeting in the lounge. It appeared from the context it was a swingers group. Two couples we met later on the elevator seemed to confirm that.

I really appreciated the "Hookers" being so kind and thoughtful as to hold the door for me, but I was too tired to take them up on the wonderful offers they had.

The bathroom offered an array of grossness starting with the pubes that were all over the floor. They really sweetened the pot for us with the 1-ply toilet paper and the jar of Vaseline. I still dont know what the heck that was all about. Housekeeping came up and cleaned with some unknown bloodbourne pathogens cleaner that made our eyes water all night.

I've never seen a bigger caterpillar turn up in a restaurant salad. They can't have washed the lettuce. Just as bad: the waiter's complete lack of surprise when he was shown the caterpillar. And filthy carpets are one thing, but have you ever seen a carpet that was literally sticky? I don't want to think about how much non-cleaning it took for it to reach that state.

To top it all off, about 30 minutes after I got into bed, the room started vibrating as if someone was drilling into the floor beneath us, and this continued on and off for the rest of the night. So as it turned out, Mr. and Mrs. Sex-a-thon next door weren't the only ones the earth shook for that night.